The growing threat of abrupt and irreversible climate changes must compel political and economic action on emissions.

EMERGENCY: DO THE MATH
We define emergency (E) as the product of risk and urgency. Risk (R) is defined by insurers as probability (p) multiplied by damage (D). Urgency (U) is defined in emergency situations as reaction time to an alert (τ) divided by the intervention time left to avoid a bad outcome (T). Thus:

The situation is an emergency if both risk and urgency are high. If the reaction time is longer than the intervention time left (τ / T > 1), we have lost control. 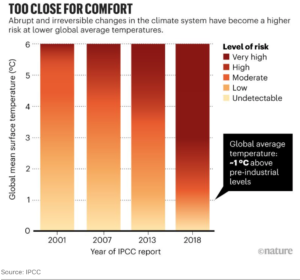 We argue that the intervention time left to prevent tipping could already have shrunk towards zero, whereas the reaction time to achieve net-zero emissions is 30 years at best. Hence we might already have lost control of whether tipping happens. A saving grace is that the rate at which damage accumulates from tipping — and hence the risk posed — could still be under our control to some extent.

We argue that cascading effects might be common. Research last year14 analysed 30 types of regime shift spanning physical climate and ecological systems, from collapse of the West Antarctic ice sheet to a switch from rainforest to savanna. This indicated that exceeding tipping points in one system can increase the risk of crossing them in others. Such links were found for 45% of possible interactions14.

In our view, examples are starting to be observed. For example, Arctic sea-ice loss is amplifying regional warming, and Arctic warming and Greenland melting are driving an influx of freshwater into the North Atlantic. This could have contributed to a 15% slowdown15 since the mid-twentieth century of the Atlantic Meridional Overturning Circulation (AMOC) , a key part of global heat and salt transport by the ocean3. Rapid melting of the Greenland ice sheet and further slowdown of the AMOC could destabilize the West African monsoon, triggering drought in Africa’s Sahel region. A slowdown in the AMOC could also dry the Amazon, disrupt the East Asian monsoon and cause heat to build up in the Southern Ocean, which could accelerate Antarctic ice loss.

NEPTA:
Read the rest of the article by clicking the link below. We contend that this provides credible evidence of the need to prepare now, not later. Natural disasters will increase, and we have the opportunity to prepare for them in the best way possible today! 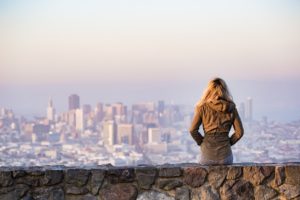 A Sincree thank you from our friend Timothy M. Lenton, who the is director of the Global Systems Institute, University of Exeter, UK 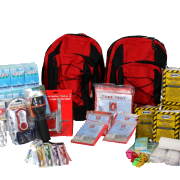